Radio is a delicious medium.

There's something immediate and personal about it - the fact that you can slip a microphone in to a conversation (almost) without the person noticing means you can get a really honest unself-conscious response.

I love talking to people. When you hit on something they love they get a sparkle in their eyes that you can follow. The conversation comes alive and something interesting, real and often funny comes out. I'm always looking for ways to induce and capture these unself-conscious moments.

I also love editing - mixing sounds, music and voices to create sound-scapes that take you to another world and evoke immersive atmospheres and emotion.

My background is in Physics and I think that audio is the perfect medium to explore and describe the bizarre and beautiful new worlds that science reveals - without the restrictions of the camera. I am totally inspired by my favourite radio show in the whole world,  RadioLab from NPR in the States, who are masters at this art.

Background in Radio and Podcasting

I fell in love with the medium of Radio during my Masters at Imperial College London. My lecturer was Gareth Mitchell, presenter of ‘Digital Planet’ on the BBC World Service sometimes referred to as ‘the most enthusiastic man on radio’. He taught us interview and editing skills and helped us produce and present a live science show on the university radio station - I had a comedy slot.

My first radio package on Music Therapy was short-listed for the Association of British Science Writers BBC New Voice Award in 2006.

After graduating I spent one month at the BBC researching and producing shows on swarming robots and insects, distant planets and archaeology for the Radio 4 show ‘Material World’.

In London I worked for a specialist podcasting company YadaYada Productions writing and producing themed tourist trails of London. I also produced this show for BBC Oxford on the impressive local Art in Action festival. 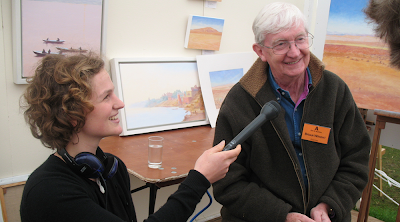 In my spare time I began exploring the medium. I rode across Scotland on a bicycle making a show about Celtic Christianity; I interviewed experts on the Ethics of Nano-technology (see here and here); I collaborated with an artist on a series of installations for the Shunt Lounge Gallery and sent home audio journey’s through London and Germany for family Christmas presents (I was broke).