Why are rugby players heroes and not scientists? 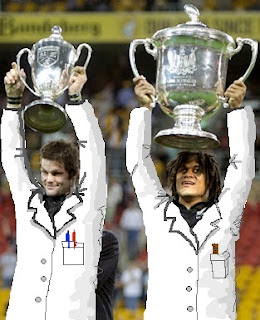 What is it about sport that gets people SO excited? And why aren’t they screaming and shouting about science? According to this article from The Punch it’s all about the story.
People love sport because of the narrative – a rugby team from a tiny country at the bottom of the world that have worked REALLY hard, been set back by failure but are back to face the world again! Will they win this time?
It’s a great story!
People understand the pain. They understand trying REALLY hard. They understand failure and eventual triumph. And if the All Blacks win it will bring tears to (some of) our eyes!  We’ll all get to share a little of the triumph.
Why doesn’t the public engage in the stories of science like that? Science has all the same story elements: hard work; odds stacked against you; failure; believing in yourself and triumphing against the odds.
Imagine an audience shedding tears at hearing about Jonas Edward Salk who developed a vaccine for polio, or Einstein who suffered rejection after rejection before finally finding a job in physics? Imagine their relief when the results come through after years of hard work and careful preparation! Imagine their cries of delight when an experiment finally works. Dancing through the streets of Wellington rejoicing… Yippeee!
That’s a good story!